Ren Yisheng said that TCM is an original medical system that has been gradually formed and continuously enriched and developed by the Chinese nation in the thousands of years of production and daily life practice and the struggle against diseases, “More and more countries in the world and more and more people opt for, use and learn Chinese medicine”. 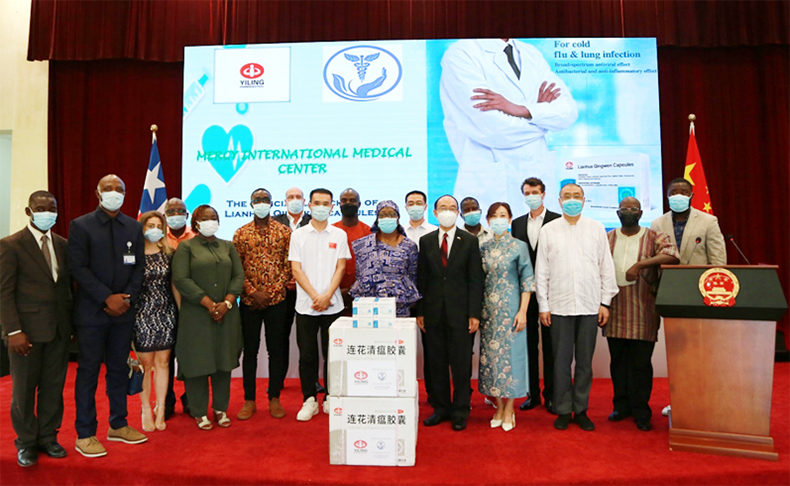 Ren congratulated the official launching of Lianhua Qingwen Capsules in Liberia, and introduced that in recent years, China’s “Belt and Road” initiative has been effectively aligned with Liberia’s “Pro-poor Agenda for Prosperity and Development”.

He emphasized that China will continue to strengthen exchanges and cooperation with Liberia in the fields of medical care and public health, actively explore cooperation in traditional medicine including herbal medicine and acupuncture, and vigorously carry out capacity building such as training, so as to contribute to strengthening Liberia’s response to the epidemic and health challenges, improving the people’s health and well-being.

Jallah expressed her appreciation to China’s long-term support for Liberia in the medical field and extended her congratulations to the launching of Lianhua Qingwen. “Today we are also celebrating the launching of a new medicine in Liberia……I want to say thank you for this official launching of thismedicine is coming at a good time, because people are coughing, sneezing all the time and they havesomething to drink as a medicine to make them feel better”, Jallah said.

Kpui also delivered his congratulations. “I would like, on behalf of His Excellency,George Manneh Weah, the President of the Republic of Liberia, my colleagues here and the peopleof Liberia, to thank you and with open arms we are welcoming the new capsules to help us mitigatethe challenges, the treatment for patients”, he told.

According to information available, Lianhua Qingwen has been approved in nearly 30 countries and regions including Canada, Kuwait, Thailand, and 8 African countries including Liberia, Nigeria, South Africa, Kenya.